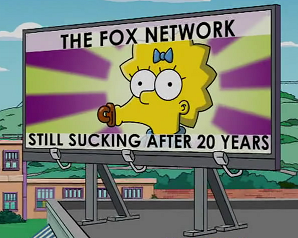 The unique structure of the Fox Entertainment Group, the core asset of the former 21st Century Fox (both now owned by and merged with Disney), along with Fox having a notoriously laxer standards and practices board compared to other networks, has allowed a large number of cartoons airing on the network to get away with insulting the network itself, its parent, associated individuals or even its sister networks and properties (especially the Fox News Channelnote Note that Fox Broadcasting Company and Fox News Channel are structured separately from each other and therefore aren't subject to the same standards and practices). This extends to cartoons produced by 20th Century Fox themselves. However, Disney owns the company and their pre-2019 animated series and removing "Fox" from all the acquired companies with "Fox" in the title to prevent confusion with the Rupert Murdoch-owned Fox Corporation, which owns the Fox Broadcasting Company and Fox News, although Disney will still continue to air and produce new shows for Fox. This page covers examples of such insults.