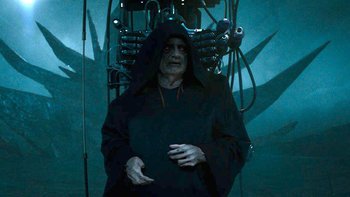 "I have been every voice you have ever heard inside your head."
In a galaxy far far away, it's bound to have many Big Bads. Many of them either are or are tied to the Sith, especially Darth Sidious (which provides the main Big Bad page image and this image)

Films
Live-Action TV
Animated Series
Star Wars Expanded Universe
Star Wars Legends
The Star Wars Legends novels have had several. In addition to Emperor Palpatine (who usually takes the role by default during any work set during the timeframe of the movies, or is at least the Greater-Scope Villain) some of the most notable are: