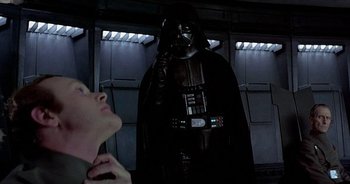 "I find your lack of faith disturbing."
Thanos: [being crushed by an enraged Scarlet Witch] Rain fire!
Corvus Glaive: But sir, the troops!
Thanos: Just do it!
— Avengers: Endgame

Spengo then decides that muttonchops would look better after all.