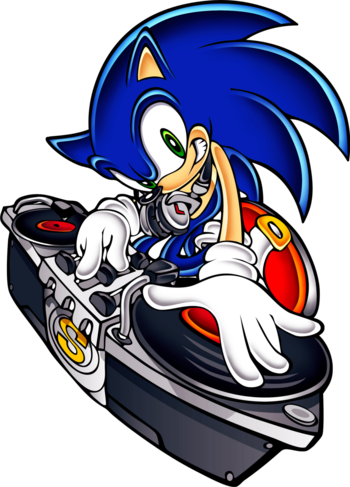 MC Sonic here to rock the place and to give you plenty of songs with attitude!
It's no secret. Compared to the Super Nintendo, the Genesis wasn't exactly a killer in the sound department. It was fueled in part by what soundtracks really caught your ear, but for a real classic, you didn't have to look any farther than the Sega mascot.
— ScrewAttack's Top 10 Video Game Themes Ever

Everyone's favorite hedgehog speedster has had quite a number of notable themes over the years which cements that, although the ride has been rocky with plenty of ups and downs, and nobody can agree on what exactly are the ups and downs (among other things), one thing everyone can agree on is that the music is awesome. We'd put "pretty much every piece of music from all the games" here instead of an actual article, but you probably want to hear them for yourself.

And you can now get a lot of this music on iTunes!

While Hideki Naganuma didn't return, the composers (Tomoya Ohtani, Mariko Nanba, Seirou Okamoto) did a good job of imitating his style while giving it their own spin.

The 16-bit version of Sonic 3D Blast, soundtracked by Jun Senoue, has some tunes just as good as the technically superior Saturn version:

Sonic and the Black Knight

Sonic and the Black Knight's soundtrack brought the return of Crush 40, who didn't fail to impress. Then again, Jun Senoue is the composer and part of the music department for Sega in general, so...

Sonic Runners
Most of the soundtrack sounds heavenly and joyful, feeling like a calm sunny day. Thank its composer, Tomoya Ohtani.
Team Sonic Racing
With Crush 40 guitarist Jun Senoue back at the helm after not being there since Sonic and the Black Knight, you know Team Sonic Racing is a return to form music wise, including the following: