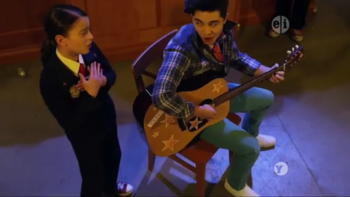 "Play one to take us home" they do!
Believe it or not, Odd Squad has its own fair share of Awesome Music. Whether it's songs with Word Salad Lyrics, excellent BGM pieces, or solos performed In-Universe, there's something for everyone. It's little wonder that a soundtrack was put out for a majority of the Season 1 songs and BGM pieces.
Advertisement:

NOTE: Some songs from Season 2 onward do not have official names, and are referred to by fan names. Spoilers are also unmarked, so proceed with caution.