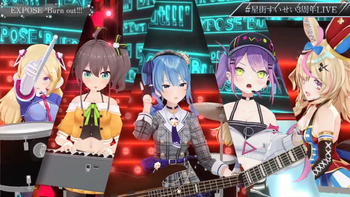 Get your gun! Let's shoot! Bang! Bang! note From left to right: Aki Rosenthal, Matsuri Natsuiro, Suisei Hoshimachi, Towa Tokoyami and Polka Omaru. The group is posing as Bang Dream's band RAISE A SUILEN for their cover of "DRIVE US CRAZY" and "EXPOSE 'Burn out!!!'" during Suisei's fourth live concert.
Hololive is an idol group. And while the members' various antics may suggest otherwise, this page reaffirms this fact.
Advertisement:
open/close all folders

Within hololive
Collaborations with VTubers outside of hololive

3D concerts
Unlike singing streams and single releases, the 3D concerts allow for studio-grade equipment that recreates the reverberation of an actual live concert, along with the talents showing off their 3D models. On top of singing covers both familiar and new, it is also common practice for them to premiere an upcoming original song within those concerts.
BGM