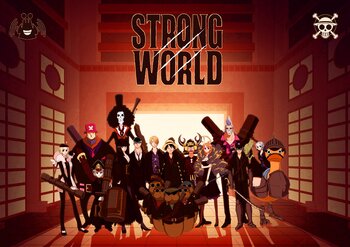 It may not be exactly the same as you remember, but this Badass Crew is still sailing in search of their dreams.
Advertisement:

A One Piece fanfiction story written by a trio of high-class fan-authors. Did you expect anything less?

Davy Back Fight
Water 7
Enies Lobby
Warning: The following is a list of what is considered the greatest Saga so far in One Piece on par with the Summit War. If you are pregnant, experience any form of pain or drowsiness it is not recommended that you read this folder, as it may or may not produce hallucinations, cause rashes or cause the reader to declare that they want to be "King of Pirates".

Baron Omatsuri and the Secret Island

The This Bites! Halloween Holiday Not-So-Horrorshow!