Awesome / The Best Years of Our Lives 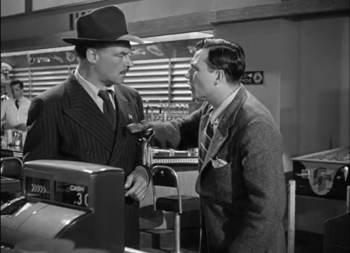 "Oh, if I only had my hands!"
Homer: Look here, mister. What are you selling, anyway?
Customer: I'm not selling anything but plain old-fashioned Americanism.
Homer: Some Americanism. So we're all a bunch of suckers, eh? So we should have been on the side of the Japs and the Nazis, eh?
Customer: Again I say, just look at the facts. (points to a newspaper)
Homer: I've seen a couple of facts. I've seen a ship go down and over four hundred of my shipmates went with it. Were those guys suckers?
— Homer standing up to a Nazi-supporting soda fountain customer