Audio Play / Are You Alice? 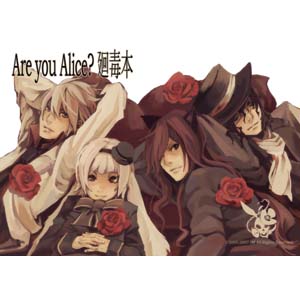 An ending that has already been determined. A story that repeats itself endlessly. This is the world that we live in. I didn't know anything. I didn't need to know. And that is... A characteristic of someone living in the world of this story.

Throwing his dreams away, a young man enters "Wonderland," completely stripped of his memories, heritage... And name. As he reacts to the name "Alice," he is forced to participate in the game of killing the White Rabbit as the 89th candidate, in order to legally earn the name "Alice." With the Mad Hatter at his side, he starts his task and gets to know many different characters, all of them having various reasons for existing in Wonderland and for being in favor or against "Alice."

But, just like how a tiny rabbit hole hides such a large world, this story has its own secrets. It makes itself very clear early on that it is not another cute "Alice in Wonderland" story, with almost every character's past hidden in scraps of paper, all with their own share of blood. Not quite a case of a lost pen, but bloody enough to seem that way, at least.

Are You Alice? started off as a series of Drama CDs written by Ai Ninomiya and became her most popular work. It is obviously based on Alice's Adventures in Wonderland, but with very individual takes compared to the original source. The series is remarkable for its complex characters and world as well as for the high amount of well-known voice actors that star on the CDs.

It recieved a manga adaptation serialized in Ichijinsha's Monthly Comic Zero Sum in 2010 by Ikumi Katagiri that lasted 12 volumes, and as of 2011, a PSP-game. The manga was released in full in English by Yen Press.

Are You Alice? provides examples of:

Alternative Title(s): Are You Alice