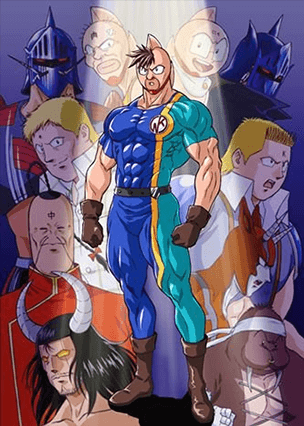 The Justice Choujin, both old and new.
Advertisement:

Sequel to Kinnikuman, Kinnikuman Nisei is the story of Mantarou Kinniku (Kid Muscle), a young brash wrestler from a Planet of Hats — that hat, of course, being wrestling. In this world, Professional Wrestling is Serious Business, so the next generation of superpowered wrestlers is getting trained at the Hercules Factory, and Mantarou is no exception. While Mantarou is a coward, he's usually willing to fight when the chips are down, and this wins him a few friends: Terry the Kid (Terry "The Grand" Kenyon), an American (and, by default, Texan); Seiuchin (Wally Tuskett), an anthropomorphic walrus; and Gazelleman (Dik Dik Van Dik), an anthropomorphic gazelle and supreme victim of The Worf Effect.

There are two manga series — one that is running in Weekly Shonen Playboy in Japan and is being sold in volumes in the US, and another that appeared in V-Jump in Japan, follows a different continuity.

Americans got their eyefuls of it by way of 4Kids as Ultimate Muscle: The Kinnikuman Legacy, so it got the standard treatment. Oddly enough, aside from blood, a great deal of innuendo and fart jokes were left in. A great deal of innuendo. But that's neither here nor there. The dub's title was based on Mattel's M.U.S.C.L.E.note Millions of Unusual Small Creatures Lurking Everywhere toy line in the U.S., which in turn was based on characters from the original program (which was never dubbed or released in North America, because the Moral Guardians would've pounced on it like ants on a picnic basket). As crazy as it sounds, even by those who detest them, 4Kids' dub for this is considered to be one of their best by far, as the goofy voices they gave for the characters and the amount of dirtier jokes they left in from the original show, and a few dirty jokes they actually added themselves, as well as replacing jokes that most American viewers wouldn't get, ended up fitting the show's tone surprisingly well. Some would even go as far as to say it's one of the very few dubs made by them that's worth watching over the Japanese original, and not in the "so bad it's hilarious" sense like their infamous One Piece dub. Of course, bringing this up with fans of the Japanese original is a good way to ignite flame wars that can be seen from space.