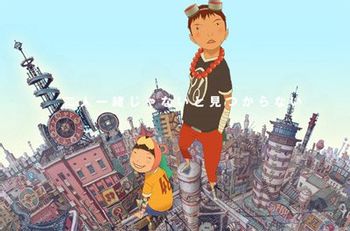 Sawada: Cats? What cats?
Fujimura: Strays. Orphans. Delinquents who rule Treasure Town. They live by the law of the jungle. The city is their playground. Underestimate them and you'll kiss asphalt.
Advertisement:

Tekkonkinkreet (a mispronunciation of the Japanese word for "reinforced concrete") is an anime film by Studio 4°C, the animation studio known for creating The Animatrix. It was adapted from a manga that originally was called Black and White in English but nowadays is sold under its original title.

The plot centers around two delinquent brothers called Black and White. Black acts as the tough, streetwise leader, while White is the childish and innocent half of the pair. Together they form the gang known as the Cats and rule Treasure Town, a decaying metropolis that is both colorful and dangerous. However, the yakuza known as Suzuki "The Rat" and his boss move in along with their plans to change Treasure Town with negative consequences for the Cats. With the yakuza's appearance come even bigger threats to Black and White, including superhuman aliens charged with hunting them down, and a mysterious creature called the Minotaur with a reputation for cruelty.

One of the central themes of the film is the duality of the orphaned brothers. White needs Black to help protect him and Black needs the upbeat White to remind him of his humanity. Once separated from White, Black slowly succumbs to his inner darkness and White must bring him back.

The film is notable for having an American director, a fellow by the name of Michael Arias

, who previously produced The Animatrix.