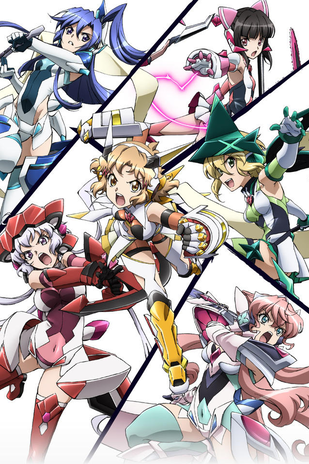 The Superb Song of the Valkyries.note Top to bottom, left to right: Tsubasa, Shirabe, Chris, Hibiki, Kirika, Maria
"Meteoroid falling, burning, and disappearing, then..."
"In the distance, that day, when the star became music..."
"Believe in justice, and hold a determination to fist."
"By shedding many tears, the reality you face is..."
"Create a history, with the light God could not know."
Advertisement:

Symphogear (Senki Zesshou Symphogear, literally "Superb Song of the Valkyries Symphogear") is an original Science Fantasy anime series about Magical Girl Warriors who use Power Armor fueled by The Power of Rock to battle Eldritch Abominations.

Hibiki Tachibana is an ordinary schoolgirl who attends a concert by the Idol Singer duo "Zwei Wing". Unfortunately, the concert is attacked by a group of mysterious Eldritch Abominations called "Noise", and Zwei Wing transform using magical Power Armor- the Symphogear- to battle against them. During the battle, Hibiki is impaled by a fragment of Symphogear armour, which gives her the power to use the armour as well. Recruited by the secret government organization behind the Symphogear, Hibiki must learn how to use her new powers to fight against the Noise on behalf of humanity, alongside veteran fighter and Broken Bird Tsubasa Kazanari while making time for schoolwork and maintaining her relationship with her childhood friend/roommate Miku Kohinata - but Noise attacks are increasing in frequency and a mysterious woman named Finé appears to be behind them...

Originally airing in January 2012, Symphogear was developed by Noriyasu Agematsu (composer of music for games and anime including Wild ARMs and Girls Bravo), published by Kadokawa Shoten, and animated by Studio Satelight. It features an All-Star Cast.

A second season was broadcast in 2013 with the title Senki Zesshou Symphogear G, with Katsumi Ono as the new director going onward. Taking place three months after the events of the original series, the heroines of the 2nd Division face a new threat when a terrorist group calling itself "Finé" emerges from the shadows with an army of Noise and a band of rival Symphogear users led by the singer Maria Cadenzavna Eve and the mysterious man Dr. Ver.

A third season, titled Senki Zesshou Symphogear GX, aired in July of 2015. Now allied, the Symphogears find themselves facing a mysterious alchemist named Carol Malus Dienheim. Aided by four powerful "dolls" known as the Autoscorers, Carol intends to dismantle all of the world's miracles via alchemy - and Hibiki and the rest of the Gear users are the one thing standing in her way. Their only hope, and their only clue to Carol's motives, is a girl named Elfnein and the ancient relic she carries.

A fourth season, titled Senki Zesshou Symphogear AXZ (prounounced "Axis"), began airing in July 2017 as part of the Summer 2017 anime season. SONG, now officially supported by Elfnein, is tasked by the UN to help clean up Val Verde, a South American country under the rule of a brutal junta. Ghosts from the past surface as Chris comes to terms with her parents' death and her own capture in Val Verde. In the meantime, Maria, Shirabe and Kirika must face the shadowy organization that backed FIS' experiments on them: the Bavarian Illuminati, represented by alchemists Saint-Germain, Cagliostro, and Prelati.

The fifth and final season, titled Senki Zesshou Symphogear XV, aired from July to September 2019. As of this writing, the story appears to have been concluded and no plans have been announced for any further spin-offs or sequels.

However, at the 2022 live concert of the show, it was announced that a new animated project for Symphogear was in development.

A game titled Senki Zesshou Symphogear XDU (short for X-Drive Unlimited), developed by Pocket Laboratory (of SINoALICE fame) and published by Bushiroad opened its servers on June 26 2017, with all Symphogears including deceased ones announced to be playable. Alongside reliving the anime's storyline and new events, the game also has two canon side-stories titled Senki Zesshou Symphogear 3.5 (which takes place between GX and AXZ) and Senki Zesshou Symphogear 4.5 (taking place between AXZ and XV). The game got a worldwide releasenote albeit limited to the United States, Canada, South Korea, Singapore, Australia, Taiwan, Macau and Hong Kong on February 14, 2020, but it ended up lasting for about 5 months

before shutting down on July 31 the same year

. Although the game continues in Japan.

The first season has a manga that slightly changes the story with a few different events (expanding on events prior to the season), but ultimately ends up with the same conclusion. Nearly two years after XV concluded, a spin-off manga, Symphogear: Feast of the Valkyries ~Shirabe’s Cooking~ was announced to begin serialization in June 2021, taking a more Slice of Life approach in an Everybody Lives AU.

The entire series is available for streaming

on Crunchyroll. In July 2019, Discotek Media announced the license of season 1 for a sub-only release, but has actually released the first two seasons.

Compare and contrast Ar tonelico, Macross 7, Mermaid Melody Pichi Pichi Pitch, Puella Magi Madoka Magica, Magical Girl Lyrical Nanoha, AKB0048, Suite PreCure♪, Kamen Rider (Hibiki and OOO in particular) and Super Sentai (Zyuden Sentai Kyoryuger and Mashin Sentai Kiramager in particular). At a stretch, you could also throw in the original Bubblegum Crisis (Girls in Power Armor with a powerful rock soundtrack for every fight) or even Saint Seiya (it's arguable that, rather than a Magical Girl Warrior show, it's better thought of as a Distaff Counterpart to the "pretty boys in armor" subgenre of Fighting Series originated by Saint Seiya).

Hibiki, Tsubasa, and Chris also appear in Super Heroine Chronicle, though Chris starts out first as a villain.