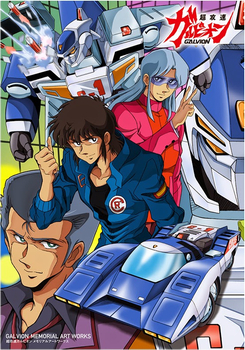 Super High Speed Galvion is a 1984 anime about a secret organisation named Circus using transforming cars to fight the evil Shadow group. Who also use transforming cars, as well as Mecha-Mooks, for their own evil deeds. Later on in the series, just before it got canceled, it was revealed that Shadow was the front-end for invaders from space.

Galvion was meant to be a toy-driven franchise for toy company Takatoku. However they went bankrupt soon after the show was canceled, without releasing any toy. Four of the toys were later released as cheap train station toys, and also by US toy company Select in their Convertors line-up. A decent selection of model kits, some horrifyingly Off-Model, was released by model kit companies Arii, Imai, and LS.

In recent years it's become a bit of a Cult Classic among mecha fans and as a result of this, Bandai released it on DVD and Blu-Ray in 2013.