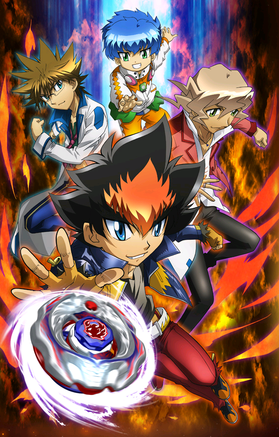 Beyblade: Shogun Steel, known as Metal Fight Beyblade Zero-G in Japanese, is the third entry in the Beyblade franchise. The manga and anime both premiered in April 2012 in Japan, and the anime premiered in mid-August 2013 in the West.
Advertisement:

The beyblades now revolve around a "crystals" theme and they are used in "zero gravity" battles, in a new bey-stadium with three corner pits. The plot takes place seven years after the end of Metal Fight Beyblade. Zero Kurogane is the protagonist who, inspired by Gingka's acts of heroism, pushes himself to become the best at beyblading.