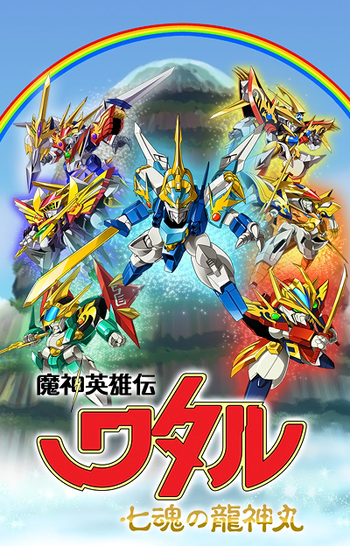 The army of Dobazudar is unlike the prior two major bosses' Wataru and his team fought against, so the heroes had it rough. On top of that, Mashins Senjinmaru and Genjinmaru fell unconscious, with Wataru and his Mashin, Ryujinmaru taking the Last Stand. To make matters worse, Ryujinmaru ejected Wataru out of his cockpit, self-destruct his Mashin body to knock off most of Dobazudar's life force, and split his spirits up to dodge Dobazudar from consuming him. Fortunately, the Prince of Soukaizan, Toraoh managed to banish the last remains of Dobazudar's life force and rescues the unconscious Wataru back to his palace.

The battle resulted in the safety of Himiko, but with the M.I.A. of Shibaraku. However, for some reason, the atmosphere of Soukaizan hasn't fully recovered. Ryujinmaru informed Wataru in his dream that Dobazudar is not yet defeated, and noticed Dobazudar's form and powers are illusionary and that Ryujinmaru's own spirit fragments might be stuck in a realm similar of Soukaizan, but upside down.

Wataru consulted the message with Empress Seiryuhi of Soukaizan over the matter, and her majesty figured it is the realm named "Musoukaizan" (無想界山；The Realm Mountain of Ignorance), a realm that no one, not even the Empress herself had any knowledge of; presuming the realm may act like a mirage and probably can set towns in different time spaces alongside each other. Knowing the challenges are far trickier ahead, Wataru is determined to save Ryujinmaru, his teammates, and restore Soukaizan as what a savior does. With the company of Toraoh and Himiko, and being informed his two other great friends, Kurama and Umihiko will catch up with them later, Wataru sets off to venture through Musoukaizan and defeat Dobazudar once and for all.

The story plot of The Seven Spirits of Ryujinmaru is spread out into three mediums:

Animation episodes 1 through 4 revives the usage of the opening and ending songs "STEP", and "a・chi-a・chi Adventure" from the first series of Wataru sung by The '90s original twin-girls unit, a・chi-a・chi (Nori & Hisa Imai), episodes 5 to 9 revives "Fight!" and "Kimi ni Tomaranai~MY GIRL, MY LOVE" sung by Yumiko Takahashi along with the soundtrack from Wataru 2 airing on BANDAI SPIRITS' YouTube channel with full Chinese and English subtitles.

Episodes 1 and 2 aired biweekly on April 10th, and 24th 2020, but went on production hault due to the COVID-19 Pandemic. Episodes 3 and 4 resumed airing on June 19th and 26th as work environment restrictions lifted in Japan. Episodes 5 through 9 began its biweekly airing as planned starting on September 25, 2020.

A special edition compilation film has been announced, combining all 9 episodes with new animation cuts.

IMPORTANT NOTE: General tropes relating to the franchise as a whole should be listed under the Mashin Hero Wataru Series. For this page, please only list the tropes relating to this series of the franchise. To old viewers, please refrain from mentioning anything related to Super Mashin Hero Wataru until if ever plot calls for it, by then, information should be hidden under spoiler tags.