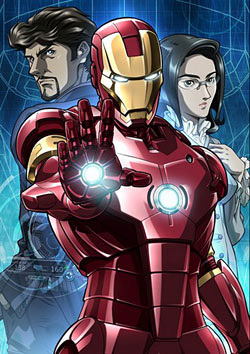 Marvel Anime: Iron Man is a 2010 anime based on the Iron Man comics, though it is perhaps more directly inspired by the live-action movies. Produced by Madhouse, it is the first of four series co-produced with Marvel Comics, each focusing on a different superhero from the company, starting with this one, followed up by Wolverine, then X-Men, and culminating with Blade.

In this series, Tony Stark heads to Japan to produce a new arc reactor station and promote the Iron Man Dio armor, but is quickly faced with the challenge of winning the hearts of the skeptical Japanese public. It only gets worse when the Iron Man Dio armors are suddenly hijacked by an organization called the Zodiac, and it's up to the real Iron Man to prove his innocence and stop them.