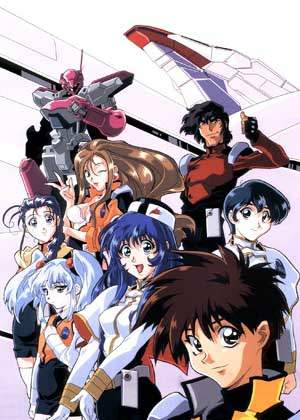 Martian Successor Nadesico is a sprawling Space Opera with a subversive sense of humor about its own genre.

Several centuries in the future, Earth is at war with a mysterious alien species dubbed the "Jovian Lizards", who use immense hyperspatial gateways to instantly deploy remote-controlled troops from Jupiter. The war is going badly for Earth when a private defense contractor, the Nergal Corporation, decides to cut out the middleman and field its own battleship, the Nadesico. In addition to being the most powerful and advanced battleship that Nergal has ever produced, they hire the top civilian operatives in each field to be its crew, who turn out to be a ragtag bunch of Bunny-Eared Lawyers.

Akito Tenkawa is a capable but shell-shocked cook who cannot remember how he got from Mars to Earth after the Jovians conquered the Martian colonies. He winds up joining the crew of the Nadesico by accident, and although he just wants to work in the galley, he demonstrates a remarkable talent for piloting Humongous Mecha and is repeatedly called upon to defend the ship. Meanwhile, he has to deal with the unwanted romance advances of his childhood sweetheart Yurika Misumaru (the Nadesico's Genius Ditz of a captain) and an Unwanted Harem of almost every other woman and girl aboard.

While it revels in being a classic "space war with giant robots" story, it also parodies the genre both overtly and subtly. One of its most famous devices is Gekiganger 3, a classic 1970s-style Super Robot anime Show Within a Show. Although G3 seems at first only a device for cheap laughs, it slowly becomes not only a sly Greek Chorus on the events of the plot but also a major element of the story in and of itself.

It was popular enough to receive a movie called Martian Successor Nadesico: Prince of Darkness, a Darker and Edgier sequel that takes place three years after the end of the TV series. The movie was criticized for the jarring tone shift towards angsty drama, unpopular changes to characterization and a number of unexplained plot points that were actually introduced in Nadesico: The Blank of Three Years, a Sega Saturn game that takes place between the TV series and movie but was unreleased outside of Japan (and even in Japan, it was released a month after the movie, and didn't really see enough circulation to justify making it required reading for it, compared to just how popular the TV series was). The movie is widely regarded as a Franchise Killer for those reasons.

Originally licensed by ADV Films, it was re-released by Nozomi Entertainment in 2017.