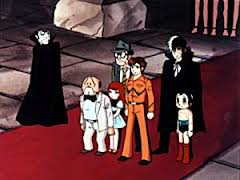 Most of the main cast.
Advertisement:

Undersea Super Train: Marine Express was a 1979 made-for-TV Japanese Animated film featuring characters from various Osamu Tezuka manga. The whole thing is basically an Alternate Universe Fic except that it was made by the actual creator of the characters. (While Tezuka was already known for creating Expies of his own characters to reuse from one manga to the next, this movie (one of three) was created specifically for crossover purposes.) Among the characters involved are Black Jack, Astro Boy, The Princess Knight, Don Dracula, The Three-Eyed One and Kimba the White Lion.

The plot involves the world's first undersea train, in its maiden voyage from Los Angeles to Japan. Several characters board it with their own secret agendas, involving everything from weapon smuggling to preventing pollution. Then midway through the trip the train is whisked back in time to the era of the lost Mu Empire, which once reigned over the Pacific, and the characters must now help liberate it from an evil tyrant.

Not to be confused with the TV series Supertrain.

Tropes in Marine Express include: