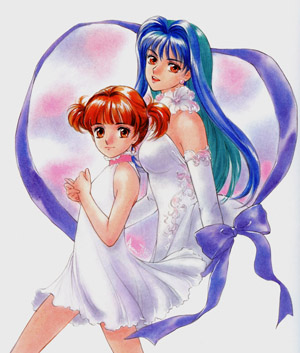 Magical Stage Fancy Lala is the fifth and currently, final entry of Studio Pierrot's Magical Girl series, it was broadcast in 1998 on TV Tokyo.

One day, nine-year-old Miho Shinohara is given two stuffed dinosaurs by a stranger. The stuffed dinosaurs come to life and present her with a magic sketchbook and pen. Within limits, and subject to varying degrees of control, she can draw in the sketchbook and bring the drawings to life. Miho can also transform into a teenage girl, whom she names Fancy Lala. Fancy Lala is scouted by Yumi Haneishi, the president of the talent agency Lyrical Productions, and begins the long road to stardom.

This entry of the Pierrot Magical Girls franchise is a heavily revised version of the one shot OVA, Harbour Light Story Fashion Lala.