Madness returned in 2018. LUNCH TIIIIIMMEEEE!!!
"They say 'nothing exciting ever happens here', which is kinda true. I mean, look at her, look at him, look at all of them. They don't know what they have inside of them. They're just sleepwalking through life, wondering when something amazing is going to happen. That's where I come in. 'Cause they don't know it yet, but these kids are the key. And I'm gonna show them how to unlock some doors... whether they like it or not. Or, they might all get killed."
— Haruko Haruhara
Advertisement:

FLCL Progressive and Alternativenote (Previously known as simply FLCL 2 and FLCL 3) are the sequel series to the 2000-2001 Japanese OVA series FLCL. The new seasons were commissioned by Adult Swim and produced by Production I.G, which had co-produced the original OVA with Studio Gainax. Character designer Yoshiyuki Sadamoto returned for the production, with original series director Kazuya Tsurumaki supervising the project alongside Katsuyuki Motohiro (Psycho-Pass). Japanese rock band "The Pillows" also returned to contribute songs to the soundtrack.

FLCL: Progressive focuses on 14-year-old Hidomi, a quiet girl with some lingering Daddy Issues, and classmate Ide, who harbors a secret crush on her. The duo find their lives colliding when two alien beings — one of them a familiar 16-year-old woman riding a Vespa scooter — enter town and begin to battle over control of the pair's latent powers.

FLCL: Alternative features the 17-year-old Kana, a teenager who fully ascribes to Growing Up Sucks, and whose worries about the impending responsibilities of adulthood are interrupted when a mecha falls from the sky, along with a 19-year-old Haruko. Soon, Kana and her friends find themselves being pulled into the alien's chaotic orbit.

In the United States, Progressive premiered on [adult swim]'s Toonami block on June 2nd, 2018; Alternative followed on September 8th of the same year. You can watch the trailer here

. In Japan, both series were presented as films and released in theaters on September 7th and 28th, respectively.

And, once again, it's pronounced "Fooly Cooly", not "Eff-ell-see-ell" or "Flee Klee". 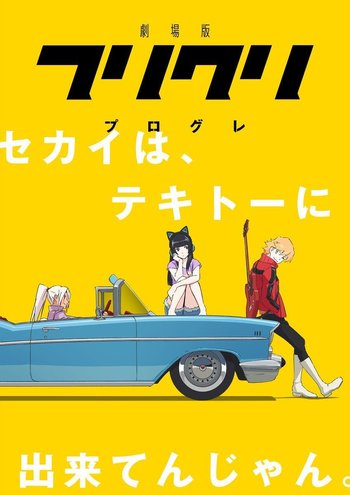 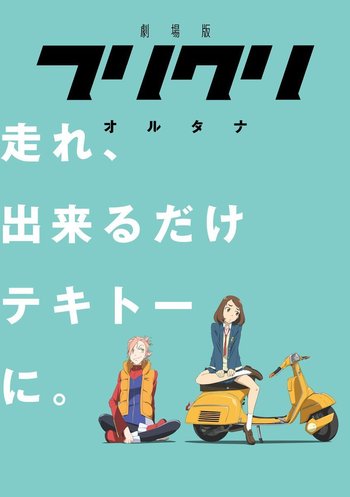 "Get ready world, here I come."