Anime / Arrietty
aka: The Borrower Arrietty 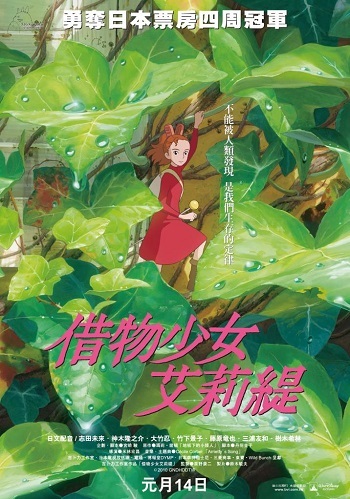 The Borrower Arrietty (借りぐらしのアリエッティ — Kari-gurashi no Arietti) is a 2010 Studio Ghibli film directed by Hiromasa Yonebayashi and written by Hayao Miyazaki, in what marks the former's directorial debut. It's based on Mary Norton's book series The Borrowers, with elements of Hans Christian Andersen's Thumbelina thrown in for flavor.
Advertisement:

Arrietty is a young member of a race known as the Borrowers. As one might suspect from that name, they make their living stealing items (borrowing, in their parlance) from the giant (to them) humans. Their primary rule is to avoid ever being seen by these terrifying creatures. However, Arrietty meets a human boy who seems to be gentle and kind. Nonetheless, she is forbidden from seeing him.

The film hit UK and Australian cinemas in June and September 2011 respectively under the shortened title Arrietty. Disney released their own dub in the United States as The Secret World of Arrietty in February 2012.

Alternative Title(s): The Secret World Of Arrietty, The Borrower Arrietty