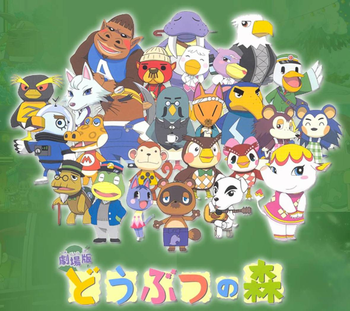 Also known by its Japanese title, Doubutsu no Mori (as well as Animal Forest and Animal Crossing: The Movie), Animal Crossing is an anime movie loosely based on the Animal Crossing video game franchise (more specifically, Animal Crossing: Wild World). Since plot isn't exactly the original games' strong point, the movie takes an appropriately Slice of Life approach to the source material. While the original was never released outside of Japan, there are at least two different unofficial English fandubs and various subtitled versions on the Internet. In 2020, the film was rebroadcasted to commemorate the release of Animal Crossing: New Horizons.

The movie begins in spring and follows Ai, a young girl moving to the town of Animal Forest (or Town or Village, depending on which translation you're watching). As she settles into town, she gets to know the locals. She quickly befriends several of them: Rosie the cat (Bouquet in Japanese), Alfonso the alligator (Albert), Margie the elephant (Sally), and Yu, a human from a different town who visits often. Margie especially becomes Ai's closest friend, after they bond over cherries. Margie even shares with Ai her dream of becoming a famous fashion designer. In the coming months, they go to festivals, annoy (and get annoyed by) Yu and Alfonso, and get wrapped up in an unusual mystery involving bottled letters, and special spots in town...

There's more to it than that, but everything that happens in autumn and beyond is somewhat... less cute and happy. Will Ai and her friends solve the mystery of the bottled letters? But more importantly, will Ai be able to stay happy living in Animal Forest?