Animation / The Night the Animals Talked 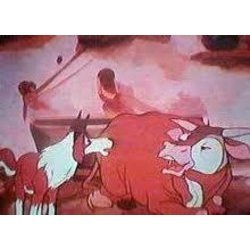 The Night The Animals Talked is a 1970 animated Christmas Special, produced by Italian studio Gamma and directed by animation veteran Shamus Culhane.

The plot is an adaptation of the birth of Jesus, from the POV of the animals who were in the stable he was born in. The only twist, as the title gives away, is that the animals have somehow been given the gift of speech. However, the animals soon become at odds with each other, developing the worst flaws of humanity—vanity and racism, just as the donkey belonging to Mary comes along, asking for room to stay in.

This special is seldom aired on TV these days, and is very esoteric in contrast to the specials produced by other companies such as Rankin-Bass. It has also never seen an official VHS or DVD rerelease, although it is believed by several to have fallen into the Public Domain. Regardless, It is an enjoyable, if brief, Christmas Special that certainly warrants watching, especially for Culhane's excellent direction.

Two versions of the film are posted on Youtube; one is a heavily abridged version in two parts, which can be seen here

Another version, which is an unabridged cut of the film, can be found on multiple parts on the same site.