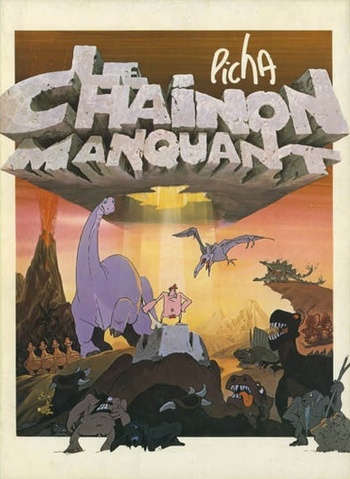 The Missing Link (French: Le Chaînon manquant), known in America as B.C. Rock, is a 1980 French–Belgian animated film written and directed by Picha.

Set in the year 196,303 BC, it follows the life and escapades of the caveman Oh. Rejected by his own kind, he travels the world with his two companions — Igua the sauropod and the Croak the pterodactyl. Determined to find his place in life, Oh meets strange new friends and enemies, and learns and develops the skills needed to survive this harsh world. The film is set to a rock soundtrack.

Note that, for some reason, in the English translation every single moment is filled with background music and a first-person narration even where the original was silent.note The original has a third-person narration, but it is used sparingly This is not necessarily a bad thing, since the additional dialogue sometimes adds to the story,note For instance, the scene with Adam and Eve is a Big-Lipped Alligator Moment in the original. In the translation, Croak later mentions that Adam and Eve "got a publishing deal for their story", tying into the theme of the movie being "what really happened" at the dawn of civilization but the original and the translation make for very different viewing experiences.

Not to be confused with The Missing Lynx or the former pro wrestler known as the Missing Link, nor with the 2019 animated film Missing Link.