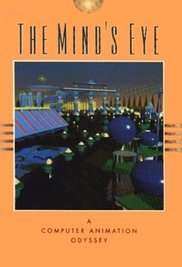 Believe or not, this clip actually makes sense.
"You are now entering a world inside the essence of your imagination. Look within your dreams. They can take you beyond the mind’s eye."
— Opening narration from Beyond the Mind's Eye, some of the few words spoken throughout the series
Advertisement:

From 1990 to 1996, Odyssey Visual Design and Miramar Productions released a Direct to Video series of movies on VHS, LaserDisc, and, later, DVDnote They were also released on MovieCD and Video8, both of which are obscure movie formats. For a complete list of what was released on what, see the trivia page with the intention of showcasing the talents of both computer graphics programs and the number of animators and animation studios current to the time, all set to electronic music. Hundreds of animators submitted animations to the project, and their work was put together in segments attempting to follow an overarching theme. The series was comprised of:

The latter three also feature visual effects generated for films and television networks: Beyond has the virtual reality segments from The Lawnmower Man, animation from an old Hawaiian Punch commercial, and the old opening segment for Saturday Night Live; The Gate included then-current commercial advertisements for the Syfy Channel (the network's ‘90s logo can be seen on the sides of the spacecraft in “Armageddon”); and Odyssey has the computer reality segments from Johnny Mnemonic, an animated segment from Ecco: The Tides of Time, a theatrical animation once used for TNT, and a visual ad for Fuji Television.

Segments from the first two Mind's Eye videos were used alongside clips from Imaginaria (another Miramar-produced CGI compilation video) on Canadian cable channel YTV's 1994-1996 "Short Circuitz" interstitials, primarily as filler back when the station was only required to run 8 minutes of commercials an hour. Independent superstation NTV (Newfoundland Television) adapted these videos into five "Computer Animated Art Festivals" in the 2000s alongside new post-production effects and pop music soundtracks, giving even more of a Mind Screw effect than before.

The entire series can be viewed on YouTube in this playlist

, which also features comparisons between modified versions of the films.

Please note that the series does not fall within the bounds of Western Animation since it features submissions from all over the world.

Tropes that appear in the film series include:

You are now entering a world inside the essence of your imagination. Look within your dreams. They can take you Beyond the Mind’s Eye.