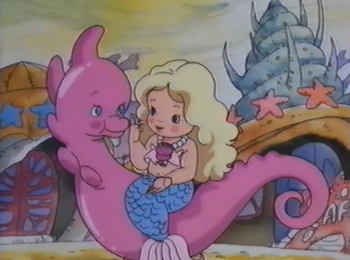 Sweet Sea is a 1985 cartoon special produced by TMS Entertainment, based on the short-lived toys of the same name by Tomy. While produced and animated in Japan, it was written by Americans to air on US TV and is considered an international co-production.

The story concerns the young, beautiful mermaid Princess Sweet Sea, who lives in the Coral Kingdom with her parents, King and Queen Neptune, baby sister Baby Brooke, and friends, including Sea Star the seahorse, Mudpuppy the dogfish, Star Fishy the starfish, Goldie the goldfish, and Purrhsa the catfish. She's given the Royal Necklace, the most powerful artifact in the kingdom, as a sign of her growing responsibilities.

Unfortunately, the evil Sheeba the Sea Serpent and her sidekick Squidney have designs on the necklace, planning to rule the Coral Kingdom with it. When Sheeba steals the necklace, it's up to Sweet Sea and her friends to get it back and set things right.