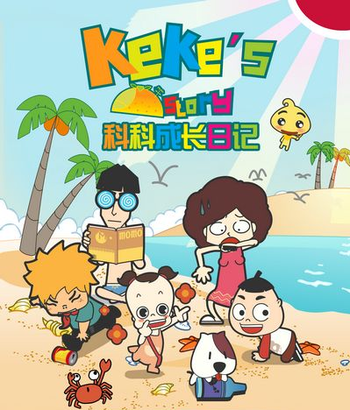 KeKe's Story (科科成长日记) is a 2008 Chinese animated series with 104 episodes. Nickelodeon Asia aired it outside of China.

KeKe is a cute, small, and joyful second-grader who does both good and bad things. He likes to draw and he likes to play with his friends and get into mischief. He has a happy family with a mom who loves him, but nags him, and a smart dad who's into philosophy, scientific inventions, and aircraft. He also lives with his housekeeper, his naughty dog Pipi, and his intelligent, cute, and small pet alien MoMo who suddenly began staying with the family one day. KeKe's curious about his future living free as an adult, but until then, he'll always be bogged down by all of his schoolwork.

The show teaches safety, health, energy, the environment, and behaviors and social ideas needed for life. The show also tackles deeper subjects like war and violence, among others.