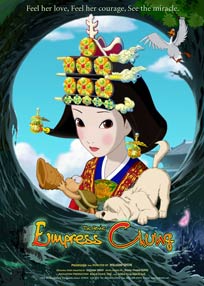 Empress Chung (Hangul: 왕후 심청; RR: Wanghu-simcheong) is a 2005 North and South Korean animated film directed by Nelson Shin (His second, after Transformers: The Movie). As a personal project, Shin spent eight years getting the project off the ground, including three and a half years of pre-production.

The animation was done in North and South Korea by AKOM (in South Korea) and The Chosun April 26th Children Film Studio (also known as SEK Studio in North Korea), and the score was also recorded in the North by the Pyongyang Film and Broadcasting Orchestra. In a move unusual for the Korean film industry, the character voices were recorded in both the South and the North due to differences in dialect. For the definitive international release version, the South Korean dub is the one used.

It was the first film to have been released simultaneously in both North and South Korea, on August 15, 2005. The film was featured at the 2004 Annecy International Animation Festival, and was also recognised with several awards in Korea.

The story is an epic, Disneyesque adventure based on a famous Korean folk tale about a daughter who sacrifices herself to restore her blind father's eyesight.

In the 18th century, Shim Chung is the good-natured daughter of old government employee Shim Hakku, a loyal and honest man who works for the king. One day, Hakku refuses to join some sinister ministers who are conspiring against the sovereign, so they set fire to his house. He loses his sight, and all his family members die except his daughter Chung. Hakku also becomes very poor as a result of the conspiracies.

Fourteen years later, Chung lives in the countryside with her father Hakku. She is the favorite girl in the village. She loves her father so much that she is willing to do anything which will help him regain his sight. When a sea monster troubling the ocean makes the waters so rough that the fishermen can't fish, Chung's devotion to her father is tested. If she sacrifices herself to appease the gods and restore calm to the sea, the fishermen promise her father 300 bags of rice as an offering to Buddha, who will then restore his sight.

After gathering up sufficient courage, Chung plunges from a ship into the icy waves, and floats through the depths to the ocean floor. It is here that her real adventures begin. She is aided by her faithful friends Danchu the dog, Gai the goose and Teobong the turtle.

More information can be found HERE

Empress Chung has examples of: