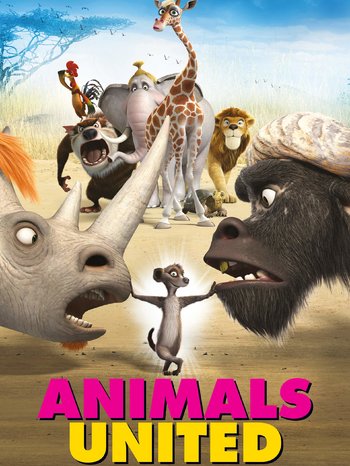 Animals United (originally known as Konferenz der Tiere in Germany) is a 2010 Computer Animated Comedy Adventure film that focuses on protecting the environment and wild animals. It's also based off the book The Animals' Conference. After a river dries up in Africa, Billy The meerkat (James Corden) and his friend Socrates the lion (Stephen Fry) head out to discover why, running into various other animals from across the world including a Gallic Rooster, a Polar Bear, a Kangaroo, a Tanzanian Devil and a pair of Elderly Galapagos Tortoise. When the group find out that human beings have built a dam and cut off their water supply, the animals become fed up with the humans and their ways and decide to band together to strike back at them and to destroy the dam. It also stars Andy Serkis, Billie Piper, Jim Broadbent, Vanessa Redgrave, Dawn French and Joanna Lumley.