Inbreeding does not cause genetic defects. It does impact the likelihood that genes already present in the parents will be expressed in the child. 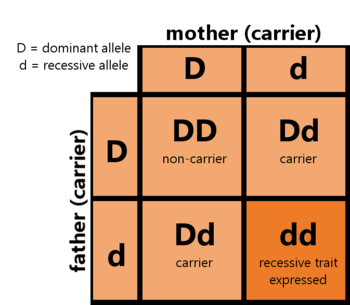 Basic Mendelian inheritance: In order for a recessive trait to be expressed, you must have 2 copies of that same gene. People who have only 1 copy do not have that trait themselves, but may pass it on to their children.

In order to have 2 copies of a gene, a child needs to inherit a copy from each parent. People who are related are more likely to have the same recessive traits, and thus inbreeding makes it more likely for those traits to be expressed.

As seen in the classic Punnett square, in order for a child to inherit a trait neither parent has, the chances are—at most—1 in 4.

Nasty genetic traits are pretty much always recessive, as a dominant trait that causes serious defects would just die out. In a diverse population, it's relatively unlikely for people with the same recessive gene to meet and have kids. If your partner comes from the same family, the odds are higher. But the specific risks of vary wildly depending on what recessive traits run in the family in question.

There are a handful of autosomal recessive disorders which have serious health risks, such as:

Many more recessive traits—such as color blindness, red hair, and being unable to roll your tongue—are completely benign.