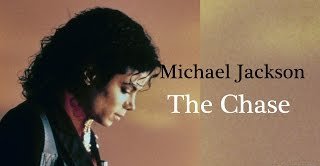 ...And the whole world has to answer right now/And they'll tell you the Pepsi way: It's good!

"The Chase" (also known as "The Magic Begins") is a four-part 1987 Pepsi commercial/miniseries starring Pop music megastar Michael Jackson, who at the time was the face of their "Choice of A New Generation" campaign, and is quite possibly the most elaborate series of Pepsi commercials to feature Jackson.

After ending his concert with a Pepsi variant of his (then) new single "Bad", Michael attempts to leaves the arena, only to have his chopper blocked off by both fans and Paparazzi alike rushing towards him. What follows is a chase across California as Michael desperately tries to shake off the overeager mob.

A fan-made remaster of the commercials can be viewed here.

The commercial was originally going to use a song called "Price Of Fame" as the central music track, but was replaced by "Bad", as the latter was headed to number one on the music charts around filming time. The unreleased version featuring "Price Of Fame" with many deleted/alternate scenes can be viewed here.