Tropes listed in the Wiki Tropes index are being discussed at the Trope Repair Shop. Click the link here

to join the discussion. 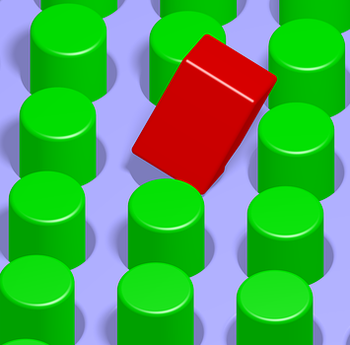 Remember kiddies, make sure it's the right shape first.
"Not every peg needs to be crammed into some trope hole, even if it seems vaguely apropos."
— Andrew Hussie
Advertisement:

One of the most common causes is that the name simply doesn't fit and invites misuse, which is why we have the trope repair shop and Renamed Tropes. Sometimes users just misread names (such as thinking that Scarf of Asskicking requires only a scarf when it means scarf + ass-kicking).

Feel free to start Trope Repair Shop threads for the tropes on this list to clean up misuse, or just clean it up yourself. Be warned, however, that many of them are Overdosed Tropes with thousands of wicks and/or Tropes Of Legend, and that changing the definition and the description to the misused version may be easier than changing zillions of links and making every user on this wiki change their mental definition of the trope, as has happened with some tropes on this list like The Dragon (see its entry for more info).

Compare Not a Subversion, where an example is labeled a subversion when it's another form of playing, and Not a Deconstruction, where an example or work is taken for a deconstruction when it's used in some other way, usually just Darker and Edgier or subverted. The non-trope version of this is Commonly Misused Words. Contrast Tropes Are Flexible, when people only stick to a rigid definition of a trope and consider any variation to be Playing with a Trope rather than playing the trope straight.

Since there are far too many individual examples to list, list examples of tropes that tend to get a lot of this.