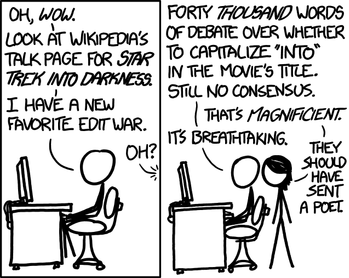 "What mighty contests rise from trivial things."
— Alexander Pope, The Rape of the Lock
Advertisement:

When a contributor doesn't see eye to eye with a current entry, they will usually make some sort of change to correct it as they feel it needs to be. However, other posters may feel that the change is wrong, and restore the earlier version or write yet another new one. If those involved are sufficiently incensed over an issue, this may lead to a cycle of posts, cancellations, counter-cancellations, re-posts, etc. In extreme cases, it may lead to Flame Wars, Thread Mode posting, or even retaliatory Wiki Vandalism. If these problems become too unmanageable, it may be necessary to lock the page.

Many wikis have policies about repeated cancels and reposts to try and disarm such conflicts, but sufficiently angry posters often have ways of getting around such controls. The Sock Puppet is a common tool. Some wikis also tend to have their own rules depending on the types of editors that run them, so one rule that applies to This Very Wiki may not apply as much to another and so forth.

If you think an edit war may be about to start, use the various communication systems we provide to talk it out. These include:

Do not make the mistake of thinking that leaving an edit reason is sufficient discussion. That's just painting over the fact that you are using the wiki to conduct your argument. Of course, if you do use it, please keep it civil. Being rude will earn you a ban.

If two people have the article open for editing at the same moment, or override the other's lock inadvertently, there is a chance that one editor's changes may be lost, except in the page history. This results in an Edit Stomp, which may result in an accidental edit war, or make an editor look like they are arguing against nobody at all.

Exception: We generally recognize exceptions to the edit warring policy in cases where the editor is making an article compliant with wiki policies (such as removing a YMMV example from a primary article or correcting formatting). That said, if someone is edit warring already, continually reverting their work won't help even if it's correct. Get the moderators to deal with the situation instead of fighting a pointless battle.

For The Other Wiki's guide to edit warring, click here

Not to be confused with the Great Text Editor Wars