This installment has been flagged and the mods have been notified.


One Fateful Day
•••
Table of Contents

Ah, Cardcaptor Sakura. A prime icon of the Magical Girl genre, it features one of the best female anime protagonists (winning the Animage Grand Prix for Best Female Character two years in a row) and is praised for its kawaii atmosphere. This is the dub of that show. If you want to see what all the fuss is about, this will give you a good idea, although if youre expecting nerd rage, there are doubtless plenty of other places on the Net that can supply that. Of course, my liking of the dub could end up being simple Nostalgia Filter, so who knows? Expect the unexpected.

There were two different versions of the opening theme which played depending on the country the show aired in. This theme song

was for the US broadcast and the one I remember on Canada's Teletoon channel, a combination of the What Do You Mean, It's Not Awesome? started by Anime/Pokemon and American Kirby Is Hardcore. Every other English country got instead a version of Catch You Catch Me

based on the Japanese theme, but with different lyrics to attempt to be more relevant to the actual show.

Anyways, it's time to begin:

An outline of a young girl appears as an ominous book called The Clow opens in the background...into a dream. Soaring above the city is the apex of a radio tower standing amongst a giant full moon right in front of the skyscraper where the girl now watches, costume rippling in the wind. A mysterious eye flashes. Staff in hand, cute animal creature at her side, and cards flying everywhere, her shoes grow wings and she is compelled to move forward against anyones better judgment. Just as she seemed to fall...it's time for school! But first, let us introduce our young heroine. 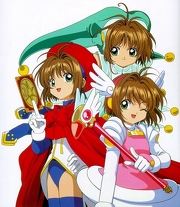 "Kero was right. He could count on me. And from that day on, my life would never be the same!"

I couldn't imagine a better character as the lead, but I won't get into much gushing here since she'll have plenty of opportunity to demonstrate her awesomeness as we go on. One thing to note is that her English VA makes her out to be a tomboy in contrast with her much higher-pitched Japanese counterpart. Anyways, Sakura narrates her day starting with her getting ready for school, getting annoyed by her big brother Toris namecalling, mentioning how her dad found a mysterious book no one could open, reminiscing about her dead mother, the usual. She hurries to catch up with Tori so she can meet up with (gasp) Julian! He's always so nice, and so cute! Well, can't argue on that last bit. While she rollerblades to school with the two, Just Around the Corner

plays in the background. It's a sweet and catchy tune that really makes this scene memorable.

At school, Sakura meets with her best friend and ace student Madison, who decided to use her as the subject of her Independent Studies project. Yeah, "Independent Studies". Like most students, Sakura daydreams in class, doodling an image of a cute animal she saw in her dream last night. Later that day, she reveals herself to be an athletic ace, but alas this time she was too distracted by that magic staff to pay attention to her baton twirling.

She comes back to an empty house, sensing an unsettling noise coming from the basement. Suspecting it to be a burglar, she goes down to check, prepared to call the police. However, it turns out the basement is also empty. Nonetheless, she is drawn to the glowing Clow book. It somehow magically opens in her hands and she takes out the first card she sees. The Windy

◊. At the first sound of the name, a breeze forms at her feet. The second, Oh, Crap!. All the cards come flying out of the book and scatter everywhere in the city. But that's not all! Now a little winged fairy-beast comes out of the book andgreets Sakura cheerfully and thanks her for freeing him! Much to his dismay, she investigates him, thinking him a toy. That's no toy, missy. That's: 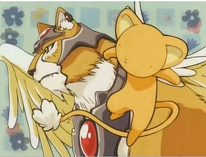 "A true Cardcaptor can battle in anything, even in pajamas!"

Kero introduces himself as the guardian beast of the cards. Turning to the book, he realizes that they all went missing, making quite some drama about it until Sakura gives him Windy, at which point he still makes drama about getting that card back. She explains that Windy blew the rest away, with them both laughing until Kero realized what she was saying.

Sakura later takes some pudding up to her room to Kero with her suspicious brother watching. Kero explains that the cards were once created by a powerful sorcerer, Clow Reed. They eventually became so strong, they became uncontrollable so they had to be sealed. Now that such potentially dangerous spirits had been set loose, Kero has to get them back, forcing Sakura to come along since she released them. She retorts by saying he shouldn't have been sleeping on the job for what turns out to be 30 years. After some thought, Kero realizes Sakura must have strong magical powers, and thus introduces her to the Key of Clow, pronouncing her Cardcaptor.

Sakura attempts to shirk her responsibility, intimidated by the job prospects. However, she doesn't have much choice in the matter as the giant bird that is the Fly

◊ card shows up. Initially blown back, Kero tells her to release the staff

◊ from the key, and she obliges.

Now how long did she spend rehearsing that?

The oversized bird gives chase, with Sakura unsure of what to do. Suddenly, she gets an idea. Demonstrating some mad rollerblading skills, she jumps on the bird and ties it up with Windy, weakening it enough so that she can capture it (sound familiar?) "Return to your power confined!" So remember kids, keep at your extreme sports, cause you never know when youll have to defeat a giant enemy bird in your life.

After all that, Sakura still attempts to refuse the call, leading Kero to taunt her for chickening out of a difficult task. He then introduces her to Fly, which naturally is an amazing experience for her and manages to sort of convince her.

Well, it sure was lucky the first card that showed up was weak to Windy, wasn't it? Incidentally, the manga apparently makes Fly immune to Windy, so yeah.

(This is a continuation of the original thread in the forums, which covers up to How Sweet It Is.