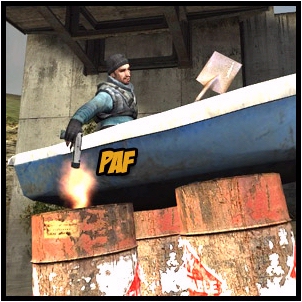 Mr. Frohman cannily uses game physics to overcome an obstacle.
Civil Protection Officer: Pick up that can.
Gordon Frohman: How the heck do I do that? [prompt: E to pickup object] Oh. Whoah! I can pick up things in this game! I mean, world.
— Concerned #7

As well as Havok there is the Bullet engine, nVidia's PhysX, NewtonDynamics, and many more. It's just that Havok is the most prominent, and we couldn't resist the pun. See also Tech-Demo Game.