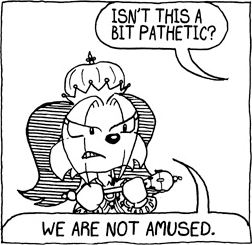 Well, aren't "we" just Miss Hoity-Toity?!
"KNOW YOU that it is Our will and pleasure that the Victoria Cross be the highest decoration for according recognition to persons who, in the presence of the enemy, perform acts of the most conspicuous gallantry, or daring or pre-eminent acts of valour or self-sacrifice or display extreme devotion to duty:

AND WE DO ordain that the award of the Victoria Cross shall be governed by the Regulations set out in the Schedule.

IN WITNESS whereof We have caused these Our Letters to be made Patent."
— ELIZABETH THE SECOND, by the Grace of God Queen of the United Kingdom and Her Other Realms and Territories, Head of the Commonwealth
Advertisement:

In Western systems, when royalty speak on behalf of their office, they tend to refer to themselves as if they were more than one person. In Latin, this is known as Pluralis Maiestatis — the Majestic Plural. In English, this is known as the Royal We.

This was most famously attributed to Queen "We are not amused" Victoria, who believed herself to be the avatar for the British Empire. This happens in fiction as well. A good way to show when the monarch in question has had enough and demands obedience is to have them switch to this form of address. Another way is to use this comedically, have a monarch use this in informal contexts or have people confuse the majestic plural for the regular one ("Where are the rest of them?"). It can also be used to demonstrate an absurd degree of self-regard and pomposity if used by someone who isn't royal.

The origin of this tradition is the idea that the monarch in question is speaking for the nation, although in times gone it was also used by religious officials speaking on behalf of the Church. Sometimes other characters will reinforce this by referring to the monarch by the name of their country; in Hamlet, for example, Claudius and the dead king are both referred to as Denmark, and another king is only ever called Norway.

Also, some languages use the plural to address other people formally. Even English does this, in a way — originally, "you" was only used as a plural objective; the nominative was "ye" and the singular equivalents were (nominative) "thou" and (objective) "thee". (This system of pronouns can still be found in the King James version of The Bible). However, using "you" as a formal term for a single person, even as subject, became so commonplace that it replaced "ye" and "thou" entirely. Yes, you heard right: "you" was once more formal than "thou", regardless of how it sounds to the modern ear.

The "Editorial We" is similar, meaning "I, speaking for this newspaper." You'll sometimes see something a lot like this used on TV Tropes, meaning "I, speaking for This Very Wiki."* This is NOT, under ANY circumstances, to be used to refer to the editor's personal opinions, ONLY for statements regarding administrative policy and the like. There's also the "Judicial We," which, particularly used in an opinion by a judge sitting alone, means "I, speaking for this court," and the "Lawyer's We," meaning, "I, speaking for my client(s)." A contrasting term is the "Patronizing We" or Nurse's We ("How are we feeling today?"), which means "you", and the "Rural Plural", which is part of certain British dialects and refers to the practice of people referring to themselves in the plural form (likely) because it is more fluid in conjecture, including non-standard plurals and pronoun contractions.

Of course, if the royal in question is a Hive Queen, it all makes a lot more sense. Finally, note that no matter how many times she refers to herself as "We", the Queen of England does not like being addressed as "Y'all".

A subtrope of Expository Pronoun. For other interesting (and a lot more complex and convoluted) shenanigans involving pronouns, see Japanese Pronouns. Compare I Am Legion, when the plural form is used because the speaker has (or thinks they have) multiple personalities themself, rather than speaking on behalf of separate individuals.